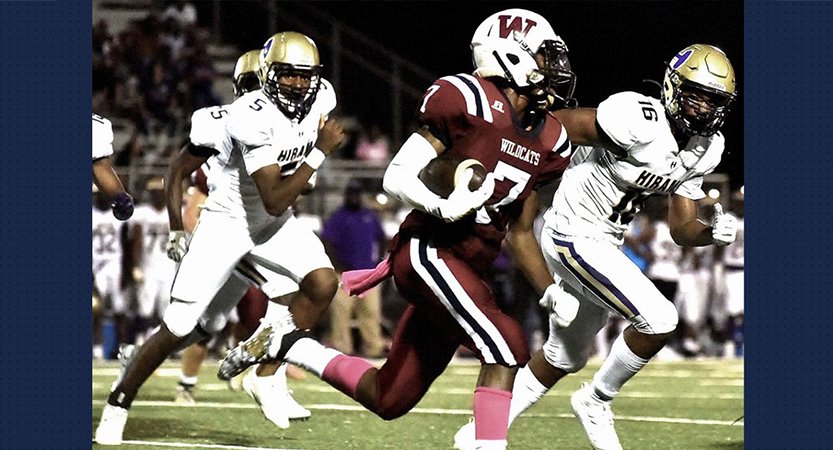 In a battle of Wildcats, Villa Rica earned a 14-8 win on the road against Woodland in a closely contested game Friday night.
For Villa Rica, it was the team’s first Region 7-AAAAA win of the year, while for Woodland, the team has now dropped to a 1-7 overall and 0-5 in region play.

“Offensively, we did everything we could. We changed formations; we tried some different stuff. We’re still working and learning and I know it’s weird to say that at this stage during the season, but we’re still trying to get things right, and at times we did,” Woodland head coach Tony Plott said. “Hats off to our running backs, Asa James ran hard, very proud of him and Demarcus Williams came back from his knee injury and he played very well. Noah Tidwell played well, and so did quarterback Johnathan Thomas. We’re close to being really good on the offensive side of the ball.”
After a quick and scoreless first half, Villa Rica (2-6, 1-5) struck first on the scoreboard during its opening drive of the second half when quarterback Tristen Allen ran down the left side of the field for a 30-yard run touchdown.

But the lead didn’t last long, as Woodland’s James scored after breaking two tackles and spinning a defender off of him before he reached the end zone on a 27-yard run. Instead of attempting the extra point, Woodland decided to go for two points and James, once again, reached the end zone and gave Woodland an 8-7 lead with 5:29 left in the third quarter.

The scoring drive by Woodland was led by James, who obtained 77 yards on four carries, while senior Williams added three yards.
On its next drive, Villa Rica put together its longest drive of the night, 11 plays for 63 yards, and would take the lead once again just before the end of the third quarter when T.J. Harvison scored on a 3-yard run.
During the drive, Villa Rica took advantage of Woodland’s penalties for a personal foul, pass interference and offsides, as the other Wildcats were able to advance 35 yards off of them.

The Wildcats’ offense would have possession of the ball two more times in the last quarter, but the team was held to a punt and came up short when James was stopped at the line of scrimmage during a fourth-down play during the dying moments of the game.

James finished the game with 22 carries and about 159 yards, along with two receptions for 10 yards, while Williams had 32 yards on 11 carries and Tidwell carried the ball three times for 11 yards.
Woodland will travel to Dallas next week when the team will face East Paulding.

“We’ll continue to fight and to get better. That’s what we preach to our kids because every week there is an opportunity to get better and we want to take advantage of that,” Plott said about the team’s upcoming last two games of the season. “We have another week where we’ll go to work and do things right and train to get better, and then we have a test at the end of the week and hopefully we’ll pass that test.”