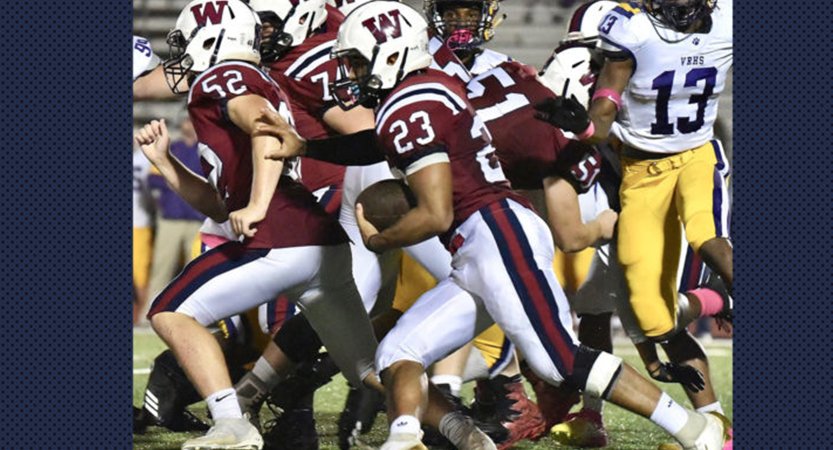 Following Saturday’s conclusion of the suspended Woodland-Cass game, normally soft-spoken Wildcats head football coach Tony Plott could be clearly heard challenging his team. A 36-7 loss to its Bartow County rival, especially in the manner in which it happened, wasn’t good enough for Plott.

His players seem to have agreed, and Woodland appears to have spent the past few days working to make sure things go differently this week at Paulding County.

“They’re smart, and they realize we didn’t play well,” Plott said. “We’ve got a lot of work to do, and they came out with a great attitude and worked. We have some leaders who are trying to keep everything in focus.

“I can’t complain. Our kids are great. I love them.”

Plott credited linebacker Blake Cash with taking on a more vocal role in the time since the Cass defeat. However, he’s been really pleased with how the senior class, as whole, has responded to recent setbacks, which also include a road loss to East Hall.

“It would have been real easy for our seniors to pack it in and call it a year, but they didn’t,” Plott said. “They’ve come in, they work and they try to get better every day just like all the other kids are. They’re leading by example. They’re a fun group to be around. It’s a really good group.

“They’re small (with only six members), but they’re doing what we’ve asked all the other classes to do, leaving the program better than they found it. They’re doing everything in their power to do that.”

As the team prepares to face the Patriots, Plott said he’s seen his team show more focus in the weight room and more attention to detail during practice. Woodland will need it with a talented Paulding County team on tap.

The Patriots (1-2, 0-1) have had losses to North Paulding and Hiram sandwiched around a resounding win over Kennesaw Mountain. Despite the losing mark, the team has several impact playmakers who could give the Wildcats fits.

Chief among them is Smael Mondon. The junior shines at linebacker and running back. According to 247Sports’ Composite, he’s a four-star recruit currently ranked as the No. 3 player in Georgia and the No. 3 outside linebacker in the country for the Class of 2021.

Another junior running back, Christian Rowe needed just 17 carries to total 184 yards in the rout of the Mustangs. He and Mondon could see a lot of action with the Patriots utilizing their rushing attack more in 2019.

“They have a couple of special kids we’ve seen on film,” Plott said. “Obviously, No. 4 [Mondon] is very good, much improved compared to where he was at last year. They’re more physical this year than they were in the past, and that’s kind of the mindset offensively.

“They have a running back [Rowe] they like to get the ball to, so they’re not throwing it as much. They still can. They have a big tall receiver they can throw to, but they are running a lot more power schemes.”

On the defensive side, Woodland will obviously still have to contend with Mondon.

“They move the defensive line a lot,” Plott said of Paulding County’s 3-4 defense. “They bring pressure from different areas.

“They have No. 4 [Mondon], he’s an absolute terror. He reminds of Emmanuel [Jones], when we had him here.”

While Woodland’s coaches on both sides of the ball have probably stayed up late at night thinking about ways to stop Mondon, the Wildcats had one fewer night to focus on the Patriots as they normally would have.

Friday’s suspension threw a wrench into the typical weekend plans Plott had, but then again, Paulding County’s in the same boat having faced Hiram on Saturday.

“Coaching-wise, it just meant we did more stuff on Sunday and Monday than we normally do,” Plott said of the schedule change. “The kids, nothing’s changed for them. We’ve tried to keep it as normal as possible for them.”

From the sounds of it, though, Woodland hasn’t had a normal week. The Wildcats have been able to ratchet up the intensity with the hopes of taking a big step forward.

More than anything, Plott wants his team to understand that there’s no reason to already be looking ahead to 2020. Yes, most of the team will return at that point and should be better.

But that growth needs to be occurring now, and if it does, the Wildcats could still put together some more wins this season.

“There’s still a lot of football left to play,” Plott said. “We’re going to take each game as an opportunity to get better. Every minute of practice and every minute of warmups on Fridays is a chance to coach our kids and get them better. …

“A lot of kids before took it for granted. They’re not doing that right now. It’s my job as a coach and our coaching staff’s job to keep them focused and let them know that we can still be a good football team this year.”