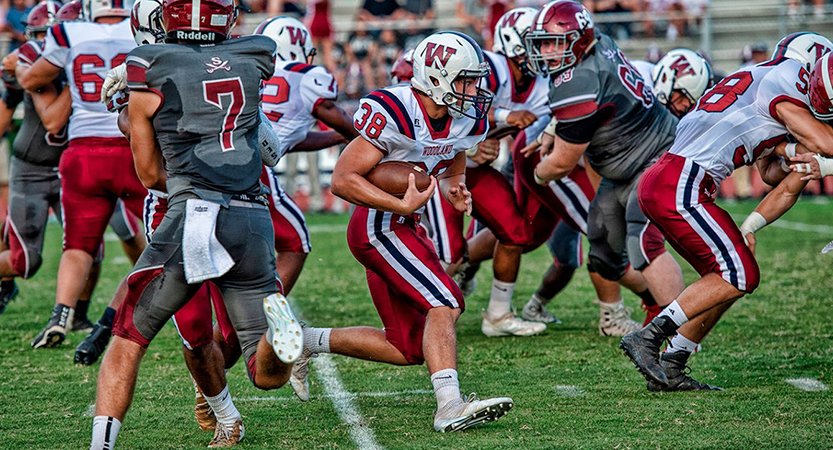 The Wildcats made a valiant comeback attempt in the second half  — at one point, scoring 20 unanswered points to make it a one-point ballgame — but a stellar Vikings rushing game ultimately allowed East Hall to walk away from Friday night’s home tilt with a narrow 34-28 win.

“It was the mistakes, the inexperience, just the youth of us,” said Woodland head coach Tony Plott. “You saw a sloppy game, we made a lot of mistakes, we weren’t disciplined in the first half.”

The Wildcats defense looked fairly solid on East Hall’s first possession, holding the Vikings to a fourth-and-12 at the Woodland 49. However, on the ensuing punt the live ball hit a Woodland player, with an eager Viking quickly scooping up the ball to give East Hall another offensive possession starting at the Woodland 21.

A steady rushing attack ultimately led the Vikings (1-2) to a 10-yard touchdown run, making it a 7-0 game with 8:40 remaining in the first quarter.

Woodland’s first proper offensive possession of the game came to an end at the East Hall 19, where the Wildcats (1-1) failed to convert on a fourth-and-1 run up the gut. The Vikings quickly capitalized on the turnover on downs, with the Wildcats giving up a humongous 60-yard-plus touchdown run to put East Hall up 14-0 with 2:47 left in the first.

Woodland’s next drive carried over into the second quarter, with the Wildcats getting as far as the East Hall 12 before a series of penalties pinned the offense down at the Vikings’ 17-yard-line. An incomplete pass on fourth-and-7 led to another turnover on downs, although East Hall ultimately walked away pointless on the next offensive possession. Indeed, the Vikings turned the ball over themselves on a fourth-and-15 incompletion, giving Woodland the ball back at the Wildcats’ own 30.

On third-and-7, it appeared that Wildcats quarterback Johnathan Thomas fumbled the ball away, with a Vikings defender returning the loose pigskin for a defensive touchdown. That play, however, was ultimately reversed, giving Woodland an opportunity to punt the ball away from the team’s own 22.

And that’s where disaster struck on special teams. The snap went high and the punter dribbled the ball into Woodland’s own end zone, with an East Hall defender quickly jumping on the live pigskin for an easy touchdown. East Hall would maintain the 21-0 lead heading into the third quarter, where Woodland had possession first.

Simply put, Plott said his team didn’t play with enough energy or intensity in the first half of play.

“We’ve got to take this and learn from our mistakes,” he said. “We’ve got to learn how to handle certain situations, and we’ve got to do a better job as a coaching staff getting these kids ready.”

The Wildcats got off to a hot start after the intermission, with back-to-back rushes from Thomas and Asa James pushing Woodland to the Vikings 17. A personal foul penalty against the offense pushed Woodland back to the East Hall 33, however, with a subsequent field goal attempt from the Vikings’ 25 blocked.

Four consecutive handoffs to Demarcus Williams ultimately culminated with a 2-yard touchdown run to finally get Woodland on the scoreboard with about 5:41 left in the third quarter.

East Hall got as far as midfield on their next offensive possession and punted the ball away. Asa James broke off a stellar 16-yard run, in the process pulling off several Marcus Allen-esque spins to escape the Vikings’ tacklers.

The ball then went to Williams, who broke off a thundering 43-yard rushing touchdown to cut into East Hall’s lead even further. The 2-point conversion was good, and it was 21-14 in favor of East Hall with 2 1/2 minutes remaining in the quarter.

The Vikings once again had to punt from midfield on their next offensive possession — only this time, the Wildcats defense got a hand on the ball and started their next drive from the East Hall 36. James recorded a 9-yard rushing touchdown to close out the quarter; the 2-point conversion, however, was no good and the score was 21-20, Vikings, heading into the fourth.

Less than 30 seconds into the quarter East Hall extended their lead via a 36-yard touchdown strike. The Wildcats’ offense pushed down to the Vikings’ 39 on the next drive, only for Thomas to fumble the ball away to the Vikings. East Hall made it a 34-20 game with a 15-yard TD pass with about 8:19 remaining in regulation.

A steady run game propelled the Wildcats back into the Vikings’ end zone, with Noah Tidwell punching in the pigskin on a 3-yard TD run. The successful 2-point conversion made it 34-28 with exactly four minutes left on the clock.

Alas, the Vikings managed to control the clock with their rock-solid run game. The Wildcats D did hold the Vikings to a third-and-13 situation with about two minutes remaining, but a costly pass interference call against Woodland effectively gave East Hall all the cushion it needed to simply run out the clock.

A conversion on fourth-and-6 with less than thirty seconds on the scoreboard finally allowed East Hall to assume the victory formation and ensured Woodland’s loss in the record books.

“You take a look at the second half and there were a lot of good things that were happening,” Plott said. “The glimmer of hope is that our kids responded, but we just did so many bad things, even in the second half … it put us in a hole that we just weren’t able to climb out of.”

Thomas unofficially finished the contest with 28 rushing yards and about 25 passing.

Woodland hosts Cass next Friday in the first Region 7-AAAAA game of the year for both teams.

“Our kids are young and each week is a new learning experience,” Plott said. “We’ve got Cass next week, and if we can’t get focused and play well against Cass, we’ve got other problems.”