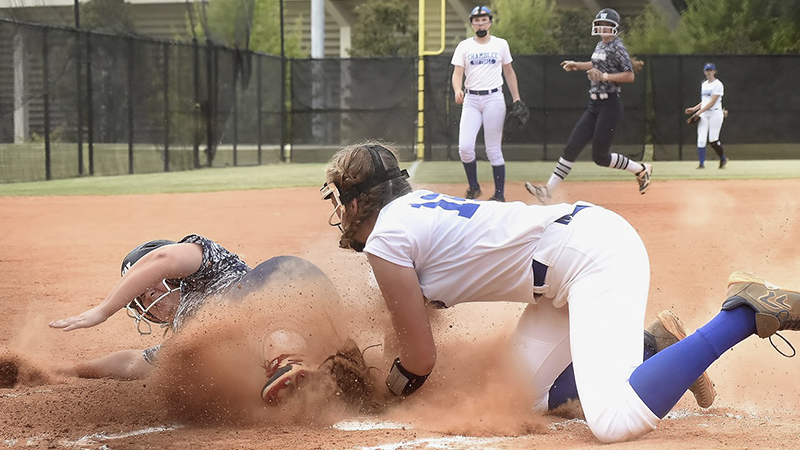 In 2018, the softball teams from Woodland and Chamblee both fell in the Sweet 16 of the Class 5A state playoffs. This year, only one of those teams will make it that far, as the Wildcats and Bulldogs meet in a first-round series.

Chamblee will host the best-of-three set after finishing as runner-up in Region 5-AAAAA. Woodland, the No. 3 seed out of Region 7-AAAAA, will head just inside the Atlanta perimeter for a doubleheader, beginning at 2 p.m. Tuesday. Should the teams split, Game 3 would take place at 4 p.m. Wednesday.

Roberts said he doesn’t know much about the Bulldogs. However, he is quite familiar with head coach Alan Loper, having played baseball with him for a handful of years earlier this century.

“We played in Senior League baseball at Chamblee about 10 years ago,” said Roberts, who played second base on the team. “I played with him four, five, six years, and we won a couple of championships. He was our pitcher, a great guy and a great coach. I told the kids, ‘They’ll be very well coached, because I know him very well.’ He’s a really good friend of mine, so it should be a lot of fun.”

Woodland (19-10) will enter the state playoffs on a 10-game winning streak. The Wildcats haven’t lost since Sept. 14 and rolled to a 3-0 record in the region tournament, outscoring their opponents by a 22-2 margin.

While Chamblee (21-6) has the superior record and boasts an impressive plus-158 run differential (compared to a plus-81 for Woodland), Roberts believes his team’s strength of schedule has his team better battle tested.

Two of the Wildcats’ region foes are ranked ahead of the Bulldogs in the MaxPreps rankings. Woodland — which is ranked No. 11, seven spots ahead of Chamblee — also faced the third-, fourth- and fifth-ranked teams in the state within the span of two days.

The only common opponent between the two teams is undefeated Wesleyan. The Wolves defeated the Bulldogs 8-0 to open the season and beat the Wildcats 6-4 for Woodland’s most recent loss.

Speaking of, if there’s a single determining factor for this series, it’s probably Woodland pitcher Lainey Baker and how Roberts decides to use her. The sophomore has been nothing short of sensational this year, but Roberts doesn’t know yet if he’ll ask Baker to throw both games of the doubleheader.

“We had a long talk [Monday] morning, so we’re going to see how it goes,” Roberts said. “I told her, ‘Who knows what happens?’ Her response was, ‘Coach, whatever you need me to do, I’ll do.’ That’s the response I wanted to hear.”

During the current winning streak, she’s been even better. Baker has thrown nine of the past 10 games, striking out 90 with a 1.19 ERA and 0.97 WHIP.

“I have a lot of confidence [in Baker],” Roberts said. “I’m sure she’ll be nervous to start with. I think, once the game starts and she gets going, she’ll forget where she’s at and just do what she does.

“We’re hoping she’s at her best, and I feel like she will be.”

One thing that could help is that Chamblee’s two main pitchers are also young. Freshman Lily McCord is 12-2 with a 1.93 ERA and 123 strikeouts in 69 innings. Sophomore Margaret Axelson holds a 7-4 record, 2.51 ERA and 77 strikeouts in 67 frames. Both are excellent hitters, too.

“Game 1, we’ll hit first, so hopefully, we can put some runs on the board in the first inning,” Roberts said. “[Baker] feels good when we score runs, feels more comfortable. She gets stronger as she goes, but the first inning is always important.”

It will take a complete offensive performance from the Wildcats to win the series.

“We had a great day,” Roberts said of Monday’s practice. “I could see it in their face. We hit for a good while and had a real good practice.

“We just have to hit together. I tell them everything they do is contagious, whether it’s good or bad. When we get going, there’s nobody better.”

Woodland had it going last year around this time. The Wildcats won their first region championship in program history in 2018 and followed it up with a sweep of North Springs in the first round of state.

While region foe Villa Rica was beating Chamblee in the Sweet 16 by final scores of 8-6 and 8-3 to advance to Columbus, Woodland had the unenviable task of hosting Buford. The Wildcats were swept by the perennial powerhouse

But Woodland is back in the playoffs for a record fourth straight time, and the Wildcats have a chance to banish the memory of last year’s playoff disappointment.

“I kept the two lineup cards in the press box all year long,” Roberts said of the two games against Buford. “… I really feel like the kids were hurt. I’m going to bring that back up [Tuesday]. I’m not going to harp on it, but I think knowing that feeling we had is going to push them. I think, we’re going to be OK.”