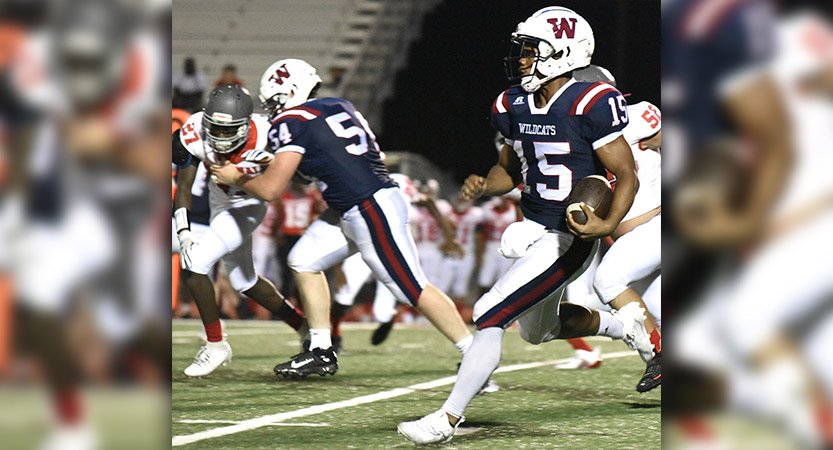 BY VICTOR TUN
Woodland defeated Osborne 43-17 Friday night at home, as the Wildcats are off to an auspicious 2-0 start to the season.

“We cleaned up some of our mistakes from the previous week; I’m proud of the guys for doing so. We were able to sustain some drives and not make some of the mistakes that killed us last week,” Woodland head coach Tony Plott said. “Defensively, we had no idea what Osborne was going to do. I think our defense adjusted very well. Osborne has some really good guys and made some big plays on us, but I think overall we were able to contain them for the most part. We were able to make adjustments on the run and I’m proud of our coaching staff for doing so.”

Quarterback Johnathan Thomas was 4-for-7 for 156 yards passing with one touchdown; he also ran for 159 yards and two touchdowns on three attempts.

Running back Asa James had 14 attempts for 72 yards and two touchdowns; he also had 87 yards receiving with one score.
Eli Jernigan rushed for one touchdown and 51 yards on eight attempts, Jaeden Smith rushed for 21 yards on five attempts and Johnathan Olvera had four rushing attempts for 20 yards. Jimmy Davis, Harlin Morris and Noah Tidwell rushed for 18, 17 and 15 yards, respectively.

Also, on the receiving end, J.T. Hampton had one reception for 53 yards and Jonah Plott caught one pass for 16 yards.

The Wildcats (2-0) got off to a quick start as the team scored on its first offensive drive of the game. After gaining 20 yards in six plays, Tidwell connected with Hampton for a 53-yard pass. One play later, James found a hole and ran for an 11-yard touchdown. After a successful 2-point conversion, the Wildcats led 8-0 with 8:35 left in the first quarter.

Woodland caught Osborne (0-1) off guard as the team executed a short kickoff and were able to jump on the ball and recover it on Osborne’s 39 yard line.

The drive would end in another touchdown for James, as he found the end zone on a 4-yard run, having previously gained 22 yards on the play before. After a missed 2-point conversion, Woodland led 14-0.

Osborne quickly capitalized on its first offensive drive of the night, as on the second play, Lawrence Isham found Joshua Horton for a 46-yard touchdown. A successful 2-point conversion cut the team’s deficit to a 14-8 score with 7:24 left in the first.

On the Wildcats’ next drive, Thomas scrambled for a 69-yard score, which extended Woodland’s lead to 20-8 with 6:21 left in the first. Woodland once again came up short on the 2-point conversion play.

Just before the end of the first quarter, Osborne would score again, this time on a 35-yard field goal by Eric Hartbarger. The score would make it 20-11 in Woodland’s favor.

The Wildcats would score once more before halftime on their next possession when Jernigan rushed for an 11-yard touchdown. The score by Jernigan capped off an 11-play, 80-yard drive for Woodland.

Jernigan gave the Wildcats a 27-11 lead with 8:28 left in the second quarter.

The rest of the second half saw Osborne punt the ball in their next two possessions while, for Woodland, Thomas was intercepted in the red zone towards the end of the quarter.

After holding Osborne to a turnover on downs on fourth down, Woodland’s Thomas found James for a 45-yard touchdown with 7:42 left in the third quarter. After a successful 2-point conversion, the Wildcats led 35-11.

Osborne would score its final touchdown of the game on the next drive when Williams ran for a 4-yard touchdown. The score capped off an 11-play, 65-yard drive for the Cardinals. A failed 2-point conversion kept Woodland with a 35-17 advantage.

The final score of the game came before the end of the third quarter when Woodland found the end zone one more time, this time on an 82-yard run by Thomas down the left sideline after breaking off a tackle. After another successful 2-point conversion, the Wildcats led 43-17.

In the fourth quarter, the Cardinals would have possession of the ball one last time, but the team came up short on fourth down in the red zone. After recovering possession, Woodland simply ran out the clock.

“Coming into the season, we felt we would be better than last year anyway, last week was the first time the kids were thrown into the fire and they responded very well. This week, they had a game under their belt and I saw a big improvement from last week to this week,” Plott said. “Hopefully we can continue to improve a little bit every week and by the time we get to region play, we’ll be hitting on all cylinders.”

The Wildcats will have an open week next Friday and will then travel to North Springs High School.